It has been a couple of big days for Kaatje.  She went to her casting Monday morning and it turned into a 3 day fashion show.  She has been out of the house every morning by 8am and doesn’t return until around 11pm.  Apparently it is China’s fashion week in Singapore.  Who knew.  Of course, like with everything, Kaatje is not allowed to share photos until after the launch.  She has been told they will be online in a couple of weeks under the heading Collision.

She was very nervous the first day  because they gave her a pair of heels that are about 6 inches- good ting mommy insisted she learn to walk on 4 inch heels for prom look 🙂  She says when she walked on stage, she was so wobbly that the crowd went “aaaweee” in anticipation of her falling.  I told her she was crazy.  I have seen more than enough of her fashion shows to know the crowd always goes “awwweee” but it is because she is so tall and so slender and she always looks so eloquent!  She didn’t believe me though.

However, I was proven right again.  Score another point for Mommy!  When she arrived today she was given three outfits.  Only 3 girls get three outfits.  Yesterday Kaatje got 2.  She said they debated giving her a third one but then went a different way.  Not only did she get three outfits today…she also gets to close out the show in the show stopping gown with a 10 foot train!  She is super excited but also very nervous.  She says the dress is very heavy and she is not allowed to pick it up to walk at all.  Once again, she is convinced she is going to fall.  I gave her a patented Mommy pep talk and she was off.  Now all there is do is wait for another few hours until it is over.

She also had her fitting for tomorrow’s fashion show.  Tomorrow’s theme is wedding.  She was originally chosen to be the bride but alas Kaatje was too skinny for the dress.  So she has a killer bridesmaid dress to wear.  She was a bit sad but also said they decided to look for someone a bit older too.  Kaatje is definitely the youngest model on the circuit here.  The next girl is mid twenties.

She also met some  hot young  Male Models.  They helped her pass the first day with lots of flirting and smiles.  Sadly, most did not make the cut and were not at day two.  She still seems to be having a good time…but probably not as much 🙂

She is also excited because she has a casting call for Sephora tomorrow.  Her and Kaelyn’s favourite make-up and beauty store.  I feel like we should own shares there for what we have spent in the last year 🙂  I have to admit it would be cool to see her up on those walls.  Although the Singapore campaign probably wouldn’t make it to Canada.

Wish I had some pictures to post but I don’t.  Check back and hopefully we will be able to update this post. 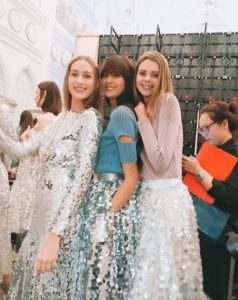 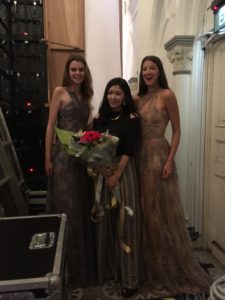 Kaatje with the designer ( above) 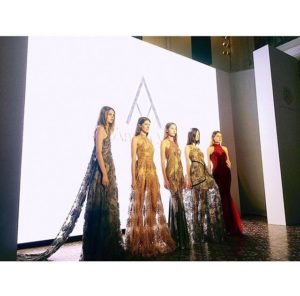 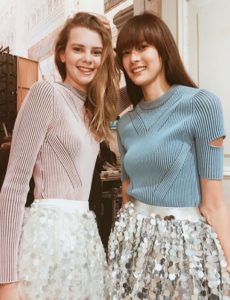