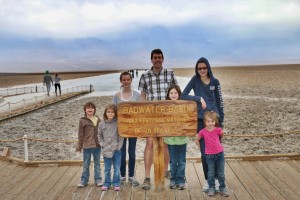 Vast salt flats that cover nearly 200 square miles at the lowest elevation in North America.  Too harsh for most plants and animals to survive, yet are quite fragile. Delicate crystals are easily crushed and the relatively thin upper crust of salt can break through to the mud layer below.

Not quite as impressive as the salt flats we saw in Bolivia but still among the largest protected salt flats in the world.

The salt flats are caused by  Death Valley’s drainage system of 9,000 square miles—an area larger than New Hampshire. Rain falling on distant peaks creates floods that rush ever lower. Along the way, minerals dissolve from rocks and join the flood. Here, at the lowest elevation, floods come to rest, forming temporary lakes. As the water evaporates, minerals concentrate until only the salts remain. After thousands of years, enough salts have washed in to produce layer upon layer of salt crust.

Sodium Chloride—better known as table salt—makes up the majority of salts on Badwater Basin. Other evaporative minerals found here include calcite, gypsum, and borax.

It is called Badwater Basin because the first prospector took his mule there and he would not drink.  The prospector assumed the water was bad but in fact it was just salty.

View of Badwater Basin from Dante’s Peak the day before 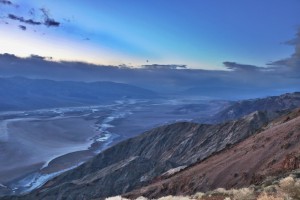