What existed before Death Valley?  Therocks of Golden Canyon provide evidence of an older basin. The tilted layers surrounding us were nearly horizontal when they were initially deposited. Movement along the major faults of Death
Valley has created a large fold. In the process, these basin sediments have been uplifted and tilted, and erosion now carries sediment out to a new valley floor. Tilted layers of rock are relatively common in Death Valley; tortured rocks have
been fractured, faulted, and folded because of the dynamic tectonic activity that continues to shape this restless land

We hiked for a little over 2 miles, admiring the unique beauty Death Valley has to offer to climbing rocks. It has gaping canyons, huge boulders, waves of plantless rock and an an alluvial fan. It is also the site where different parts of the original Star Wars movies from George Lucas were filmed. 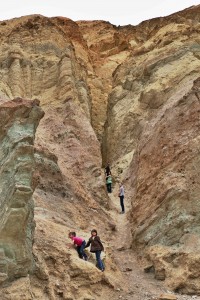 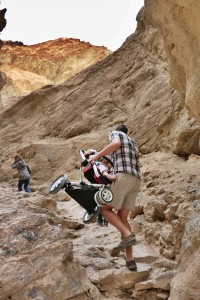 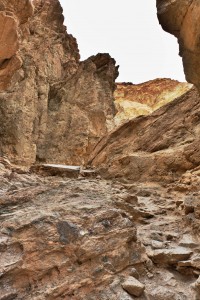