So Kaelyn got done earlier than Kaatje, plus she had a headache so we met up and went out for soup. We had Wonton Soup at the mall.

All was good until she found the secret ingredient (and I don’t mean Cilantro) – we had no idea they added it until half way through. Krill. That was all Kaelyn could eat. 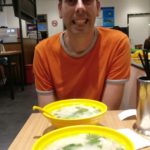 Dad ready to chow down

The ‘secret’ ingredient they add