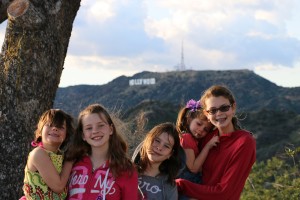 We woke to a warm sunny day.  The girls complete their schoolwork outside ont he picnic table in shorts and had to keep moving into the shade because the sun was too hot.  What a nice feeling!  We heard there was an ice storm at home 🙂

When Daddy wrapped up his meetings, we set off to explore Hollywood.  We purchased our map t the stars and set out to find Taylor Swift’s House.  The girls were so excited even though we could only see her green privacy fence and security gate.  Poor daddy, the roads are so narrow that only one car can pass at a time, you have to take turns pulling over for cars to pass.  This proved a real problem when it came time to turn around since the hills are a dead end, the streets are narrow, and driveways are all gated.  Daddy needed to make about a 300 point turn.  It took us so long that the security guards at Taylor eventually opened the gates.  I prefer to think it was to take bitty on us.  They were going to offer us their drive way to turn around in.  Daddy thinks they were coming to chase us away since we had been outside for too long.  Either way…as they opened the gate, daddy had finally got the van turned around.  Daddy also noted the plan clothes police officer sitting in an unmarked car.  Amazing the things you seen when it takes 5 minutes to turn around.

After that we were off to Hollywood Blvd walk of stars.  We saw many names we recognized.  It was a lot of fun!  Once we completed the walk of fame, we headed to Griffith Park and Observatory.  We took a photo with the Hollywood sign and goofed around before heading home. 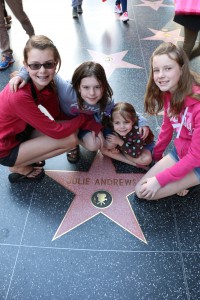 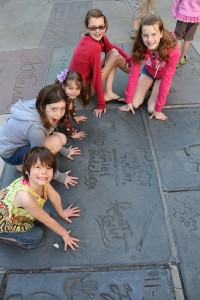