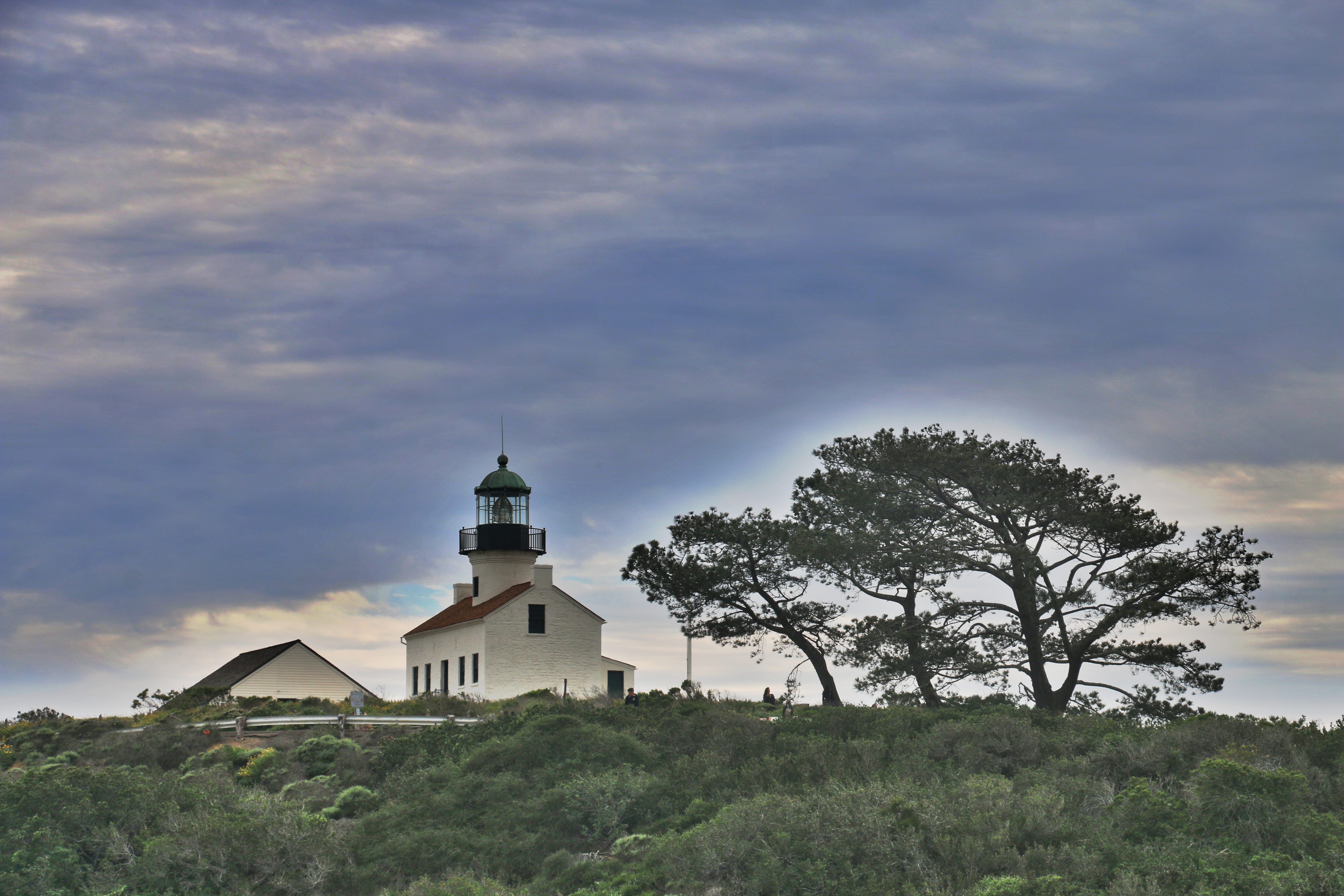 Today was an exciting day.  We started are trip to Cabrillo by exploring tide-pools. The rocky intertidal zone, on the western side of Point Loma, is a window into the ocean ecosystem along San Diego’s coast.  Periods of low tide cause pools of water to form along the shore in rocky depressions. In them, you can see an assortment of colourful plants and animals, including sea anemones, brittle stars, octopuses, and a host of other creatures. OF course, it helps that park rangers are everywhere pointing out the creatures since they are very hidden, even in these tiny tide-pools. 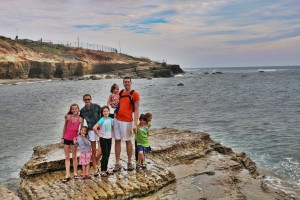 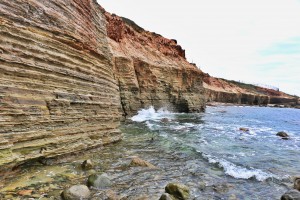 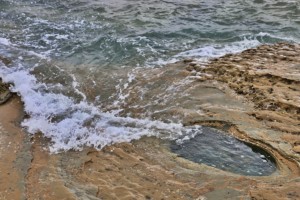 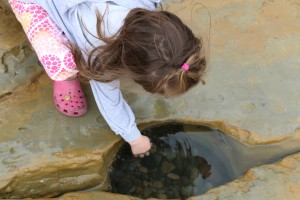 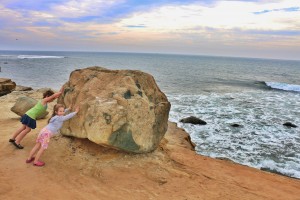 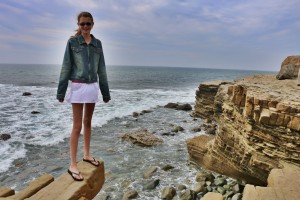 In order to get the kids to leave the tidepools, we had to agree to come back her on Saturday to explore some more. We then set off to learn about how original lighthouses worked.

The Old Point Loma Lighthouse stood watch over the entrance to San Diego Bay for 36 years. At dusk on November 15, 1855, the light keeper climbed the winding stairs and lit the light for the first time. What seemed to be a good location 422 feet above sea level, however, had a serious flaw. Fog and low clouds often obscured the light. On March 23, 1891, the light was extinguished and the keeper moved to a new lighthouse location closer to the water at the tip of the Point.

Although mommy and daddy found the restored light and lenses to be remarkable, the children were really amazed by the fact that the lighthouse was actually a house.  As we explored the rooms, it was easy to imagine your childhood, growing up here, isolated form almost everyone and everything.  We later learned that the boys in the family here rowed across the Bay to attend school in Old Town San Diego where we head been a few days earlier.  That seemed unbelievable to us.  The walk down the cliff. The distance they had to row.  It was surreal.

We also explored the garden where they grew their food, the catch basin where they collected rain water for drinking and the winding staircase that let to the light.

In the exhibit set up in the assistant keepers cabin, we learned that when the fog was to thick, the keeper stayed up all night firing gun shots to warn boats of the dangerous rocks below.  It must have been quite the life.  As I was thinking this. I was reminded that we live quite a life.  One of the girls started screaming ” Mommy I am peeing.”  We all turned, horrified to see a stream of liquid running down the main hall.  While the older girls wanted to crawl into a bush and die of embarrassment, I quickly realized how many times this has happened before.  I watched the whole family kick “Operation Clean Up” into gear without even a word.  I evacuated the screaming child.  Tammy ran for the diaper bag to get some wipes.  Of course, this was suppose to be a five minute stop so we didn’t bring it.  No problem…there was a nearby bathroom.  The family filed into that bathroom one by one and grabbed a handful of napkins and headed to the exhibit hall to clean the floor.  They could then be seen heading one by one back to the bathroom to dispose of the dirty napkins.  Within 2 minutes it was as if it had never happened.

The only thing that remained was the nagging question ” Why didn’t you go to the bathroom when we stopped 10 minutes ago.”  No answer! 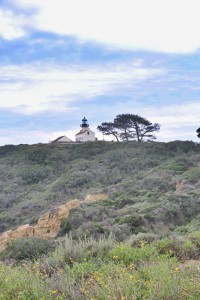 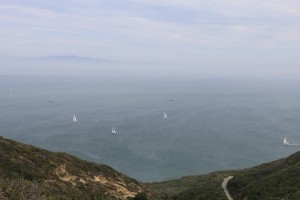 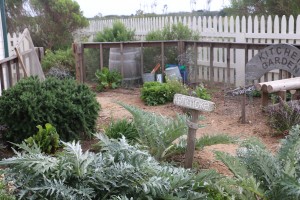 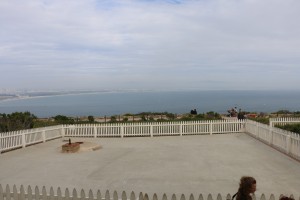 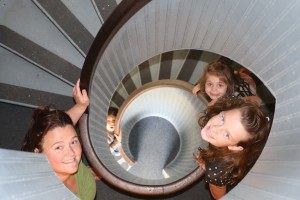 From the lighthouse we ventured out to the Whale Watching Platform.  From the platform you can see the Whale Highway as they call it.  IT was pretty windy so we didn’t stay here long but we did take int he exhibit.  We always take about how tall Kaatje is but notice her below laying on top of the baby whale sizing.  She looks tiny there 🙂 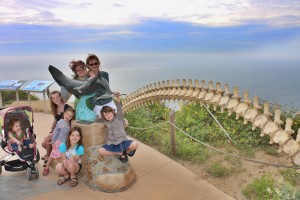 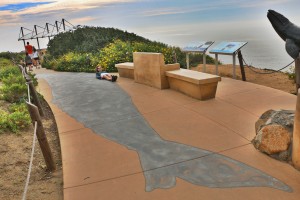 We ended our visit at Cabrillo’s Monument and the Visitor Centre.  Climbing out of his boat and onto shore in 1542, Juan Rodriguez Cabrillo stepped into history as the first European to set foot on what is now the West Coast of the United States. 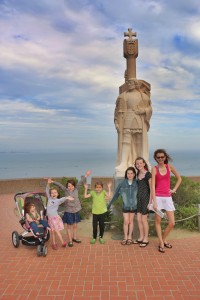