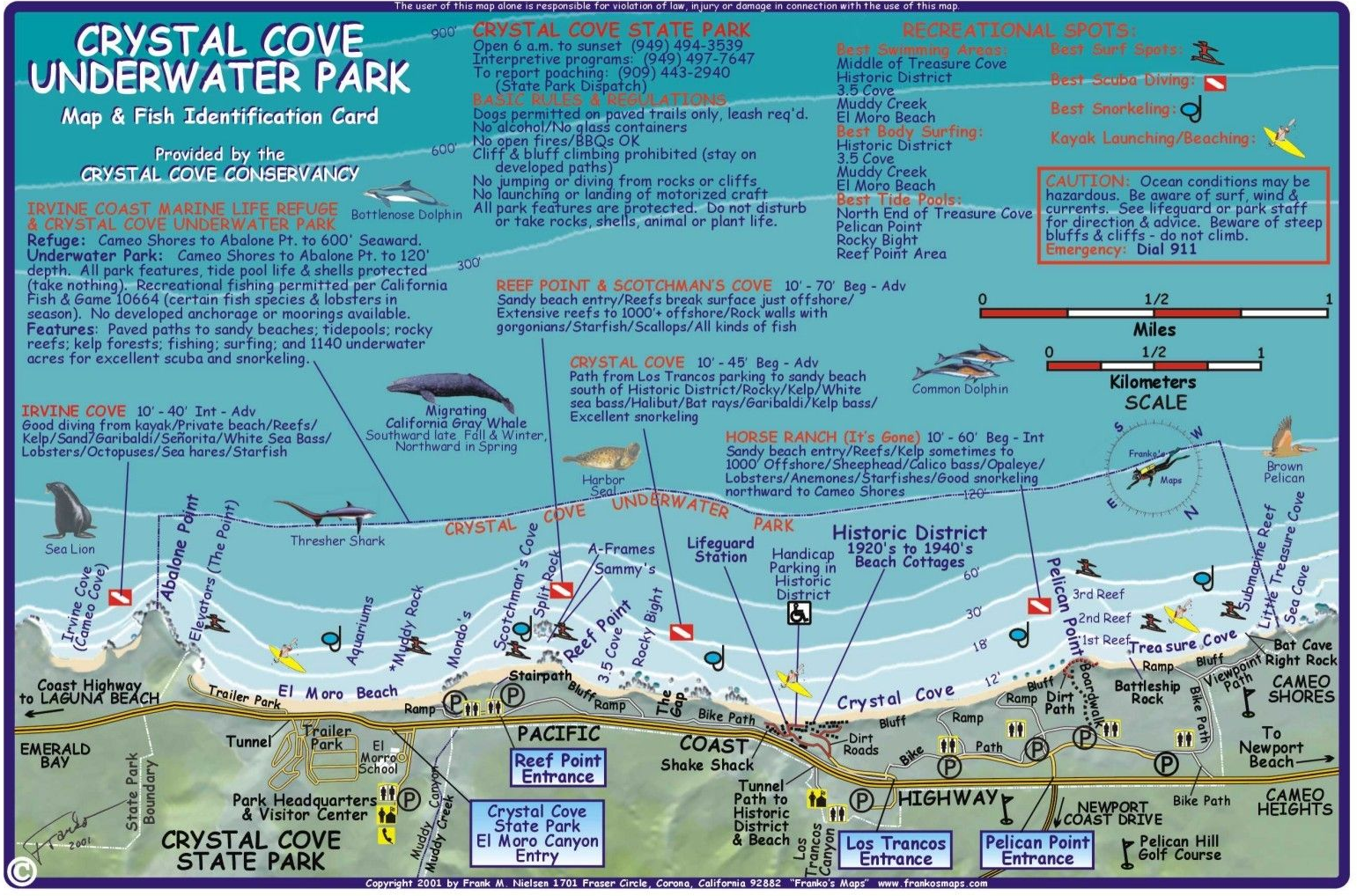 It has 3.2 miles of beach and 2,400 acres of undeveloped woodland.  The offshore waters are designated as an underwater park.

While researching this place prior to our visit, the girls learned that the intertidal wildlife includes purple shore crabs, sea hares and sea anemones. On the bluffs and terraces, ground squirrels, cottontail rabbits, western fence lizards, California king snakes, California gnatcatchers, California quail and deer are found. The park’s open space areas offer habitat for coyotes, bobcats, roadrunners, gopher snakes, western toads, red-tail hawks, California thrashers, rattlesnakes and more.
The park was an instant hit.  We entered the park and parked at Pelican Point because we heard it hard reasonable snorkeling.  We loaded our arms with our excessive amount of beach gear (towels, wetsuits, snorkels, masks, sand toys, beach cabana tent, etc..)  As usual everyone is scrambling to get the lightest tote and whining if they didn’t.  In fact, the whining was so intense that they completely missed the rattlesnake beside the boardwalk we were on.  When Kaelyn and I pointed it out, everyone started screaming and daddy instantly dropped his extreme load of beach gear in an effort to get the camera out and capture a photo of the large snake.  The snake, realizing that he was no match for this screaming herd had already bolted for the nearby bush.  Poor daddy!  He was probably the only person who really wanted to see the Black Diamond Rattlesnake and he never got a chance.  Needless to say he was very disappointed.  So disappointed that he couldn’t even bare a lecture about why we don’t scream at wildlife.
Lucky for us, we rounded the corner of the cliff a few minutes later and all our breathes were taken away with the beautiful sight in front of us and all the tide pools we could explore.  The snake was quickly forgotten as we noticed dolphins jumping around and playing in the water right in front of us.  We had heard you could snorkel with the dolphins but we didn’t really believe it!
We quickly ascended to the beach and set up camp for the day.  We spent a bit of time exploring tide pools and then the older girls pulled out the wet suits and headed to the surf.  Unfortunately they were no match for the waves and the fear of one of them drowning actually caused daddy to head out in the 60 degree water with no wetsuit.  Safety first!!  The girls safety, not his.  Luckily he was too active to get hypothermia.  The low tide, rip current and reefs prevented us from being able to snorkel so we were not int he water for nearly as long as we normally are.  That also helped save Daddy form hypothermia!
Unlike the others who were disappointed by the low tide, Sam was very thankful.  She explored the tide pools for hours.  It also helped that the water in the tide pools was insanely warm.  When she found creatures, she would call her sisters over, or fish them out with the pail and bring them over for everyone to see.  She is a little marine biologist in the making.  So proud, knowledgeable and gentle! 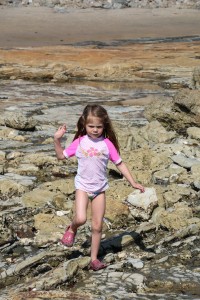 Sam’s beach playground.  We told her that sea kelp banner was the the ocean way of welcoming her to the park!  She said ” They must know it is almost my birthday!” 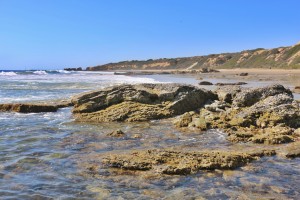 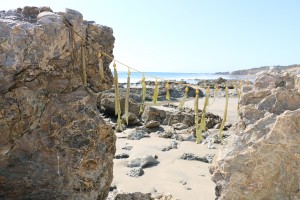 Some of Sam’s discoveries 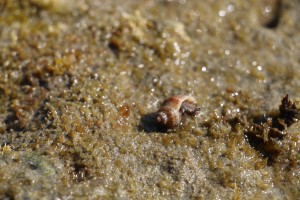 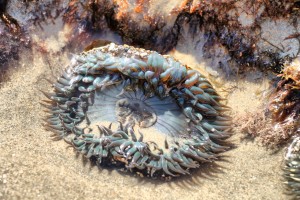 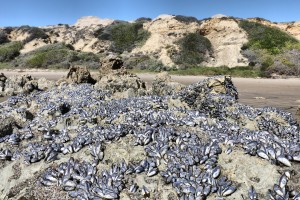 Sam sharing her excitement with anyone who would listen.  Maria was definitely her most devoted student but Sam had to guard the creatures.  Maria stillike to put everythign in her mouth 🙂 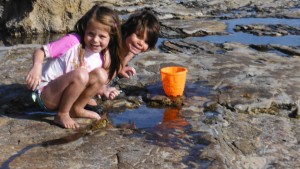 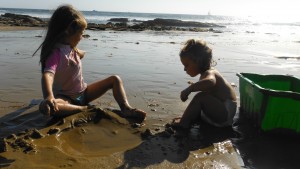 This series of photos is a personal favourite of mine.  Daddy, worried that the girls did not understand or respect the power of the waves, so he went out to supervise and ensure everyone’s safety.  From shore, we questioned his respect for the surf.  Be sure to make these photos large and look at daddy’s face.  He appears to not notice the wave approaching, barely notice Kaatje being swallowed by the surf and you can almost hear him laughing at her and telling her she just needs to jump, right before he is knocked face first into the sea where he swallows buckets of salt water.  There were rumours of vomit as well, but those have not been confirmed. 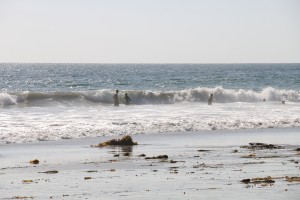 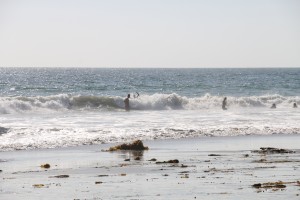 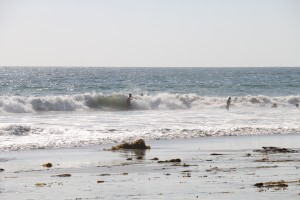 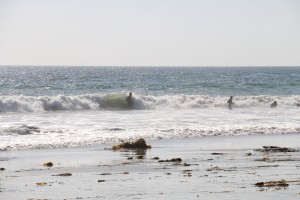 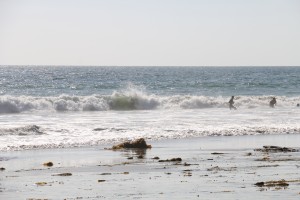 Meanwhile, the rest of us were busy building sand castles, and messages for all the grandparents back home.  Hailey would like all of you to know that she loves you!  Please note the message in the sand below.  Also note, Hailey’s reaction when Maria catches a glimpse of her way down the beach and Godzilla (Maria) turns the sand toy bin into a walker to help her reach the city she thinks Hailey has made for her to destroy. 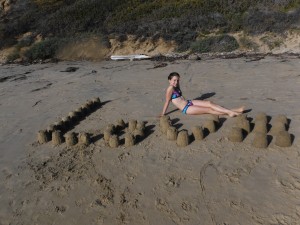 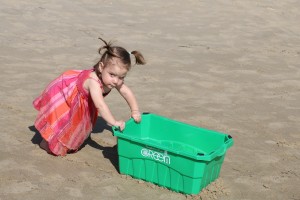 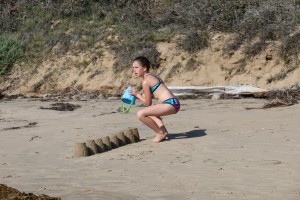 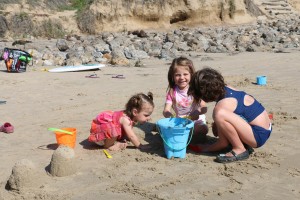 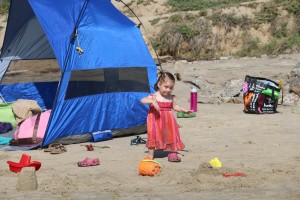 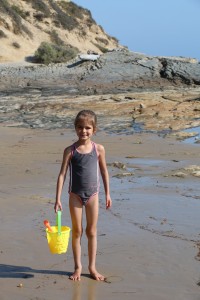 When everyone had finally had enough of sand time, it was on to gymnastics. 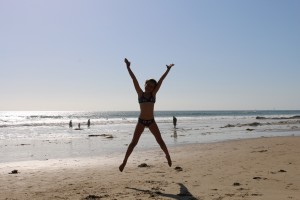 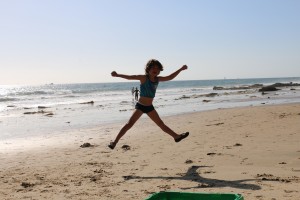 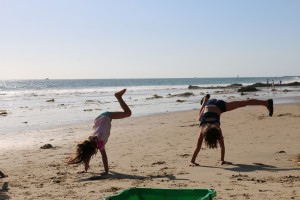