This morning I woke up to the sound of Maria calling my name. I know it sounds like a nice way to wake up, and it is, except for the fact that it was six thirty in the morning! We got up and had some breakfast. Everyone stayed wrapped in blankets since it went below freezing last night.

After a quiet morning, we packed some lunch and headed out for the ‘Great Smokey Mountains, the most visited National park in the world, with over eleven million visitors a year. Local population is only about five thousand, which is about the size of Blenheim, but there are people everywhere here. It feels like it should be New York City.

The drive started wonderfully, we saw a beautiful river that cut its way down the forested mountains, but as we started arriving at the gates, we were all disappointed to see an hours worth of traffic just to enter the park.

We turned around planning to get up very early the next morning to avoid the traffic. As we drove around sightseeing mom was planning our next stop. She was soon on the phone with Cumberland Gap National Park but was disappointed to learn that they had no available spots open for the tour today. Today was starting to look like a flop, lucky for us mom had more then one trick up her sleeve, and who knew that an educational stop at the Andrew Johnson National Historical site would become an adventure! 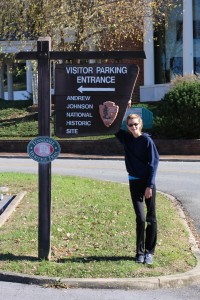 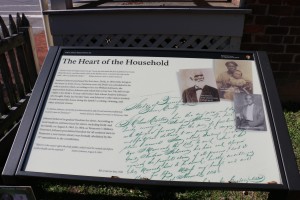 Before I tell you the tale, let me tell you some of the things I learned today to give you some background.

Andrew Johnson was America’s sixteenth vice president and seventeenth president after Abraham Lincoln was shot, serving from 1865 to 1869. From what we were reading online he wasn’t looking like a very nice guy- he was voting for slavery to continue, and other things that gave us a pre-conceived notion about him. However, we were wrong! We learned from visiting the replica of his first house where he lived with his parents and siblings that he was born to a very poor family.

Their house was the kitchen to a little Inn, and when Andrew was just a little over six his father died saving his wealthy employees from a freezing pond. He died of pneumonia. After that the men who’s lives had been saved by Mr. Johnson did not help support the family at all, leaving Andrews mother in great distress and with very little. That made Andrew a bit distance from the wealthy and lazy.

We learned later that Andrew’s mother signed him up to be an apprentice to become a tailor. He was taught this trade in exchange for seven years of service. Unfortunately, five years into his apprenticeship, he was threatened with a law suit by a neighbour and he slipped away in the middle of the night. The tailor offered a ten dollar reward for his return. If returned, he owul have to serve double time at the tailor shop. A couple of years later, Andrew returnred to Raliegh North Carolina and collected his mother and siblings and lead them over the Appalachians Mountains to a small town called Greensville. Here he opened a small tailor shop called ‘Johnsons Tailor’. Johson was married and his wife who had an elementary education taught Johnson to read and write and helped him refine his language skills. The tailor shop soon became a spot for political discussions and Johnson learned he had a gift in debating. In the years to follow Andrew was voted Alderman; Mayor of Greensville; won a seat in the Tennessee State Legislature; became Governor of Tennessee; and was soon elected in to the United States Congress. He was very quick to rise to power and before he knew it, he became Vice President.

We also learned that Johnson had several slaves. He originally bought a 12 year old girl named Dolly. It was crazy to learn that he could buy a person for less then a few horses. At first I was put off by the fact that he owned slaves but we then learned that Johnson also bought Dolly’s brother Sam so that they could stay together.

Fast forward a bit to after his time in office was over and he freed the slaves and said you may leave go anywhere you please or you can stay and continue working for me for pay. They stayed! Sam, now older with five children and Dolly, although never married with three children, continued to look after the Johnson house. After touring the home and seeing the modest gardens, it was obvious that Johnson didn’t need all these servants and it was just costing him money. However, he paid them all because he didn’t want to separate the family.

We learned a lot about the entire Johnson family. There was no shortage of tragedy.   Johnson’s second son was kicked off a horse, hitting his head off the pavement, cracking his skull, and he eventually died of his wounds. Robert, Johnson’s eldest son, never truly overcame his brother’s death and soon fell into depression. With his mother who was terribly sick with tuberculosis, and his father in Nashville, he himself started showing signs of tuberculosis, he took an overdose of a medicine to help clear the lungs called Adelisine, which killed him.

His sister Mary Johnson, the eldest, took over the job as first lady so her mother could rest and soon became Johnson’s favorite, acting as a motherly figure since their mother couldn’t leave her room.

We learned most of this through a very pleasant tour guide. The man was a retired teacher and principal. He was very patient with the little ones, encouraged all of our questions and knew the answer to every possible question we could think of. He told us all how glad he was to have a home- schooled family with him today.  The girls got to try on some old outfits and explore the grounds. 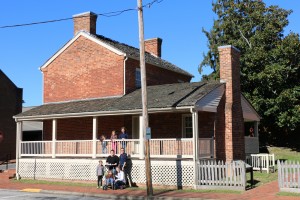 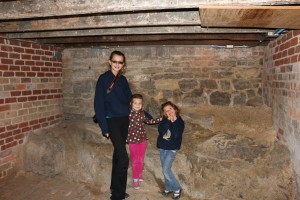 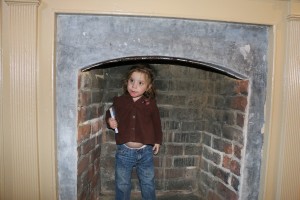 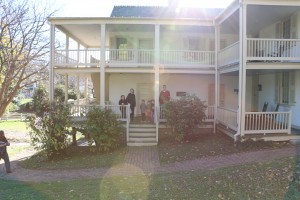 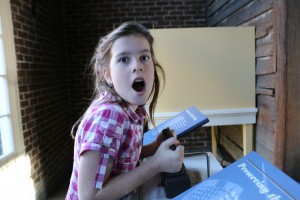 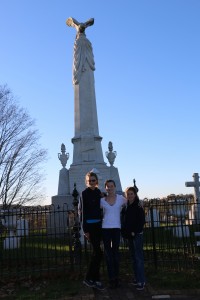