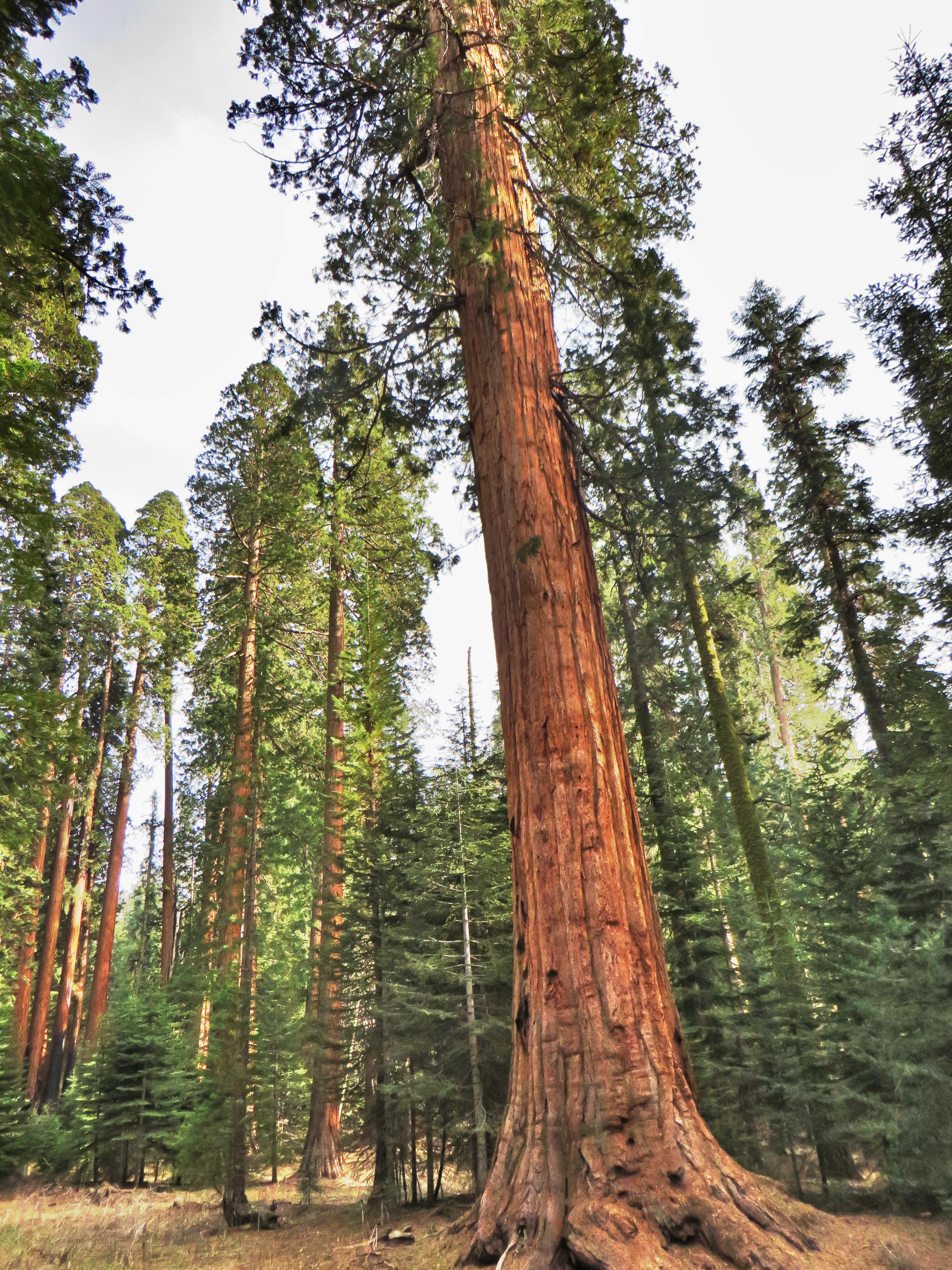 Today was a travel day for us.  We traveled approximately 4 hours from LA to Visalia. We were suppose to wake up early this morning and get on the road by 7:30 so that we would have a full day at the park this afternoon but that did not happen.  We spelt well past 8 and were not on the road until 9:30.  It is rare that a the kids would all sleep in.  We must have needed it.

It was nice to sleep in but it made getting our park visit agenda tight.  There were no leisurely strolls or hikes, we needed to be focused and on a mission all day long- that can be difficult with 7 children, 2 with ADHD!  But it was worth it.

Our amazement started long before we even reached the park.  We are in the Napa Valley.  When I think Napa Valley, I think wine but we traveled through these massive orange groves.  I don’t think there is anything I can say to communicate the impressiveness of the miles of orange trees and the heavenly smell.  When I think oranges, the first thing that comes to mind is Florida but I have never seen orange groves like these in Florida. 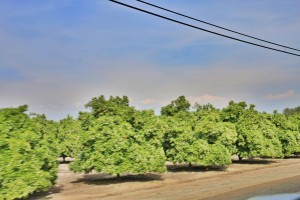 Like no other place on Earth, the Giant Forest in Sequoia National Park is alive with mystery and wonder. We all thought we knew what to expect here…big trees.  Daddy expected a forest like back home, basically flat.  Boy was he surprised!  He had to drive up all these crazy narrow winding roads.  The turns are so sharp that vehicles over 22 feet are not allowed.  We are 20 feet.  The edge of this narrow road is either cliff wall or cliff edge.  By the time we reached the 5000-7000 feet elevations where the sequoias grow, we were all nauseous. We met another couple who had actually thrown up.  Luckily all those years on the teacups at Disney had prepared us well for this drive.

The Giant Forest
At the heart of the park, in the shade of towering sequoias and redwood groves, the Giant Forest is home to half of the Earth’s largest and longest-living trees. Named in 1875 by John Muir, the forest is a stand of more than 8,000 colossal sequoia trees – many standing just as Muir found them. 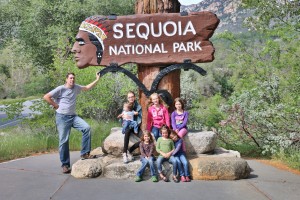 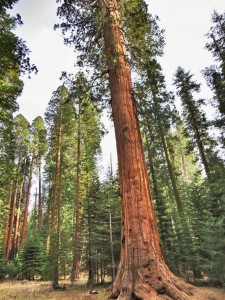 We started our exploration at The Giant Forest Museum. We had heard that this was the best way to get to know the Giant Forest and its trees.  Here, we had the opportunity to: learn how to identify trees; discover the difference between California coastal redwoods and giant sequoias, and explore the ecology and natural history of the park.  The girls were thrilled with all the interactive exhibits. 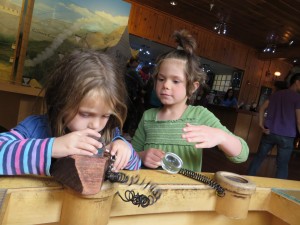 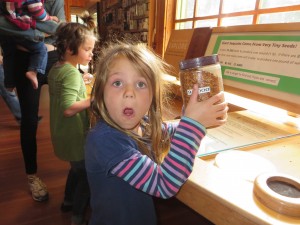 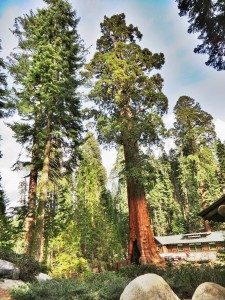 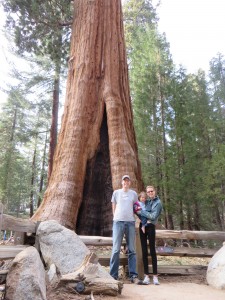 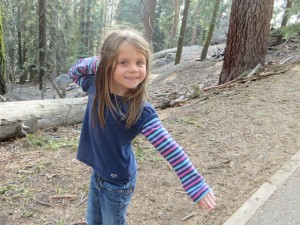 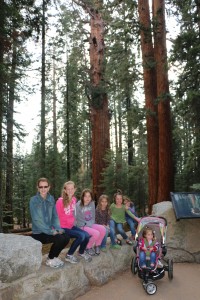 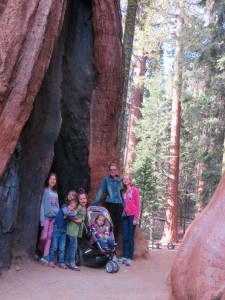 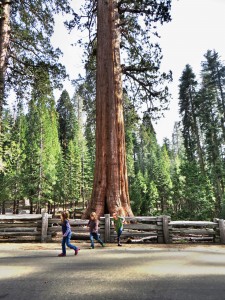 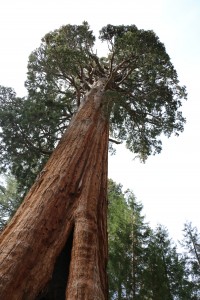 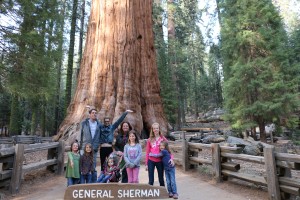 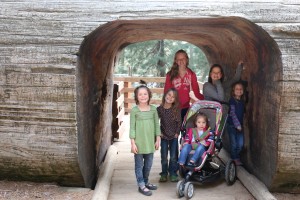 After General Sherman, we were off to tunnel road.  After all, this was the whole reason Sam insisted we visit this park.  She wanted to drive through the tunnel which is a carved out fallen down tree.  We arrived at the tunnel and saw the 8 foot clearance sign.  There was some hesitation on our part but we decided to try.  The people in front of us stopped because they were worried we were going to get stuck.  We did not get stuck, but we did not clear it either.  It looked as though we would but due to the dip the road, we were not able to make it all the way through.  We had to back up and take the bypass.  It was still an experience though. 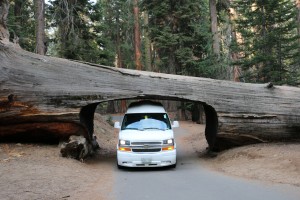 We ended our day at the park on the Moro Rock Trail.  A steep 1/4 mile staircase climbs over 300′ (91.4 meters) to the summit of this granite dome. From the top, you will have spectacular views of the western half of Sequoia National Park and the Great Western Divide. This chain of mountains runs north/south through the center of Sequoia National Park, “dividing” the watersheds of the Kaweah River to the west and the Kern River to the east. Also on the eastern side of the divide is Mt. Whitney, the tallest mountain in the lower 48 states. Unfortunately, because many of the snowcapped peaks in the Great Western Divide reach altitudes of 12,000′ (3657 meters) or higher, it is impossible to see over them to view Mt. Whitney from Moro Rock.  This was a never ending climb but it was worth it to watch the sunset from here.  It was nerve wracking though.  There are signs everywhere talking about taking safety seriously because people do die here.  I would see a sign and then turn around to see that some older girl had let go of their buddies hand and the little girl was swinging on the guard rails.  Guard rails that they could easily slide right under and ground full of loose gravel.  As if this was not enough,  Daddy followed the lead of 20 something group and crossed the barrier for his selfie.  The girls attempted to join him but mommy had to threaten divorce if they were allowed.  It was an amazing end to the day but I was relieved when we set foot back on solid ground.  It was also a nice walk down.  The group of 20 somethings were behind us and they sang wonderful religious harmonies about nature. 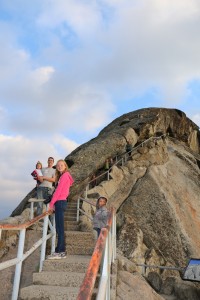 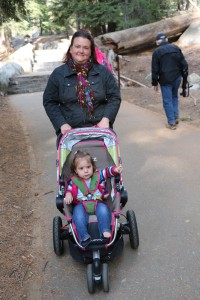 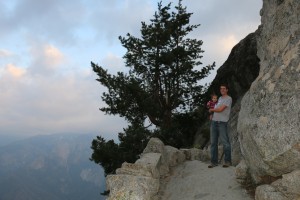 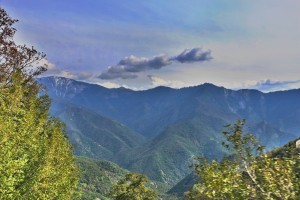 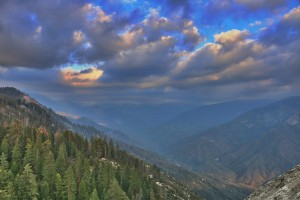 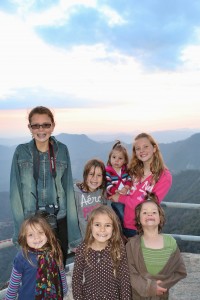 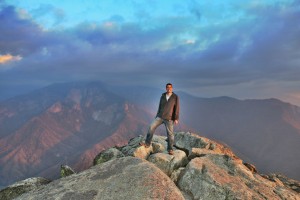 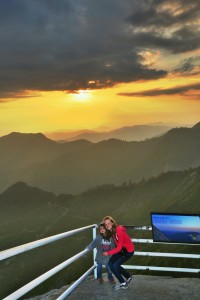 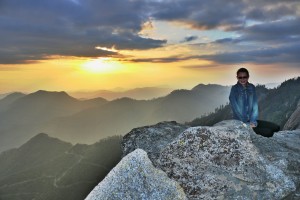