Waking up was today was a slow and painful process. It started as usual with the cry of a baby- who is up at the break of dawn.  Then Tammy and Sam call out to her to- in an attempt to calm her down but it really just fuels her more.   No matter how many times I tell them “If you leave her she will go back to sleep” they never listen.  Probably because much like Maria, they think the sun it up and so should I.   Reluctantly, I  roll out off bed, yawning, and wishing for once that they would sleep in.  Honestly, I a bit grumpy and not much of a morning person.  Mom jokes that the grils woke the beast before she had enough sleep to turn into the princess.  hse suggest I go back to bed but I am too stubborn and grumpy to accept.  She forces me to make my bed then, mumbling about the small confined space and the need to stay on top of keeping it clean.  Eventually we settle down to a nice breakfast of eggs, toast, and cereal, and by then I am ready to start our day.

I’m sorry to report that nothing exciting happened in the morning, I learned about the difference between the associative properties and commutative properties in the math, and I learned about the periodic table, but that’s about it.  Dad had meetings in the morning and since it was to cold to play outside that made it the perfect morning for homeschooling.

As we got ready to leave for our adventure in the afternoon we were shocked to learn that the little girls and mom would not be coming with us.  I  expected the we were going on some really hard hike and mom was not in the mood to risk same falling off some even larger cliff but I think Hailey knew what we were doing.  hse had been begging for days and she stood outside the trailer grinning form ear to ear.  She looked like it was Christmas morning.

Dad and Mom did surprise me at least, by making Hailey’s dream come true (and I must say after that I wouldn’t mind a horse of my own… wink, wink, Nana).

It was just so amazing! As we saddled up it was just like the movies. Kaely’sn horse was named Cookie and was covered in different color spots. Hailey’s horse was named Midnight and was completely black except for a white circle in the middle of its head.  That circle looked like a moon and I thought her name was very fitting.   My horse was also black but she had a white racing stripe down her nose and her name was outlaw!  Dad’s horse was named was Colt.  Colt was a soft brown horse with a mind off it’s own! 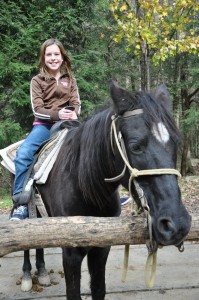 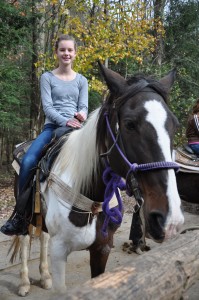 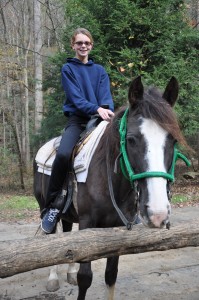 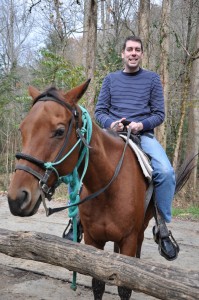 At one point, we were all heading through a stream… Colt looked over, stuck his leg out as if to dip his toe in the water to feel how cold the water was and decided he would take the less traveled path around the stream on the edge of the plummeting cliff.  No matter how hard Dad pulled on the reins, he would simply turn his head to look at dad as if to say “really dude- enough already- we are going this way.”   Dad is lucky he didn’t die!  Hailey was so focused on what was happening with dad, she forgot to keep legs up and she got soaked up to her knees.

Throughout the trip, Colt was also always lagging behind.  Dad and I joked that his horse and mine ( who were suppose to be in aline, we’re going through an awkward phase in their relationship because Colt insisted on being almost 20 feet behind.  The rancher kept telling dad to give him a kick so that he would catch up, but you know dad…he is not one for kicking a horse.  He gave him a little love tap and the horse did nothing.  Again the rancher said, come on kick him.  Get him moving.  Tap gives him a slightly more aggressive but still really wimpy tap.  The rancher calls out a third time ” A real kick!”  Dad could be heard whining “I don’t want to kick him!”  It is about this time that we stumbled upon a family of deer, ( a mother and two babies).  We were so close that I could have reached out and touched them.  We were all so in awe and pointing to dad so he would notice.  Unfortunately, dad was so far back that he didn’t see the deer.  Not only did he not see the deer, he somehow thought we were saying there was a bear.  I am sure he was wishing he had kicked the horse at that point.  Suddenly dad was upon us…but the noise and the excitement of our group had scared the deer away.

Even without the deer, the sights were just amazing- thousands of trees with different shades off green, orange, red, yellow and purple made the forest come alive like a work of art.  Wildlife filled the trees and we went on.  It was really like something from a movie. 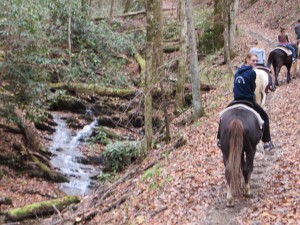 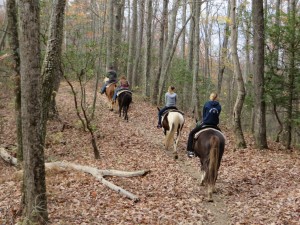 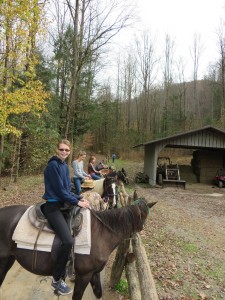 The afternoon felt like it was over in about one minute. None of us wanted to leave but we needed to meet mom and go explore the visitor centre.  The entire time, dad was complaining about how is back hurt.  They were not able to extend dad’s stirrups long enough for him to be able to fully extend his legs when riding and the steep mountainous terrain really made it difficult for dad’s back since he could not properly position himself.  In fact, he can still barely move.

At the education centre, we watched an educational movie and learned some cool facts later. Did you know that when we were horse back riding the stablemen told us not to let the horse eat the leaves, we found out it was because rattlesnakes live under the leaves, their skin trained to match the brown leaves, and that it would jump up and bite the horse! It would off course scare (and hurt him) and he would take off and we could get hurt.

Dad was in his place; he would wander from exhibit to exhibit, only saying as much as “Can you imagine”… and stuff like “Wow! No way”!

We came back and had a dinner off mashed potatoes, (Maria likes them) chicken (Maria loves that) and some green beans (Maria doesn’t like that), then settled in for a nice long rest.