The Cumberland Gap Cave, also known as Gap Cave, is a tour that is as amazing as the history behind it! This cave includes five levels, carved out by water and millions of years old.  However, level five can only be explored with scuba gear due to the fact that it is completely underwater.

We arrived at the visitor centre, bought our tickets and they passed around the flashlights.  We were very surprised to see the exhibit which showed the size of the trees that had to clear to build the site and how long it will take for the newly planted trees to get back to the size of the ones they took down (2500) years. 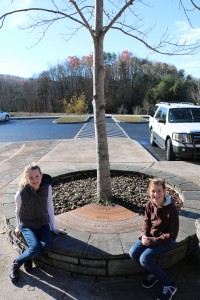 Soon we were headed up a sunny trail to the caves mouth.  It was an easy path, for the beginning but it soon became very steep and exhausting. 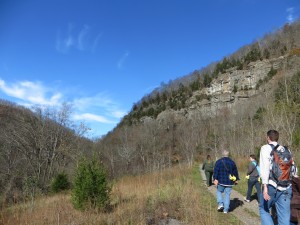 Apparently this trail used to be the old highway in the mid 1900’s, but so many accidents caused trouble for the cave and the tourists so they cleared the highway and planted over eighteen millions trees so that the trail could be as realistic as possible.

What’s cool about this cave is that the higher you go up, the older the history gets.

The first recorded person to ever travel threw the Cumberland gap was Thomas Walker, a man traveling alone at the time, who recorded it in his journal, stating that this passage between what we now call the Cumberland Mountains and Appalachian Mountains was a not a very good way to travel, but later travelers and the early settlers claimed otherwise.

The cave we explored today, was first explored of civil war soldiers, who were in need of shelter, and later out of simple boldness.  The soldiers burned their names into the stone with their candles, which we saw today. 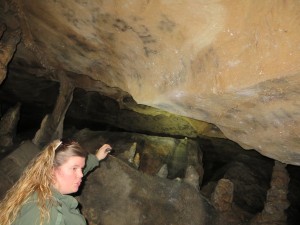 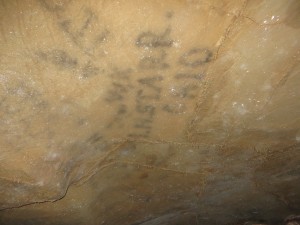 Unfortunately, we also saw lots of graffiti.  Originally, this cave was commercially owned.  With groups as large as eighty-five to hundred people per tour guide it was difficult to watch everyone.  Also, people use to slip the tour guide money to get them to look the other way so they could slip off and explore alone.  With that many people, so much damage was being done to the cave that it had to be closed down, until it was acquired and reopened by the National Park Foundation. 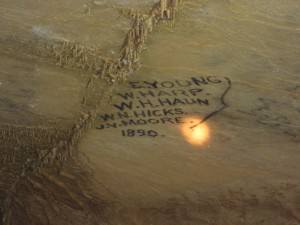 We learned that long sharp rocks that came down to a point, or that reached from the top of the ceiling to the bottom of the floor are called columns. 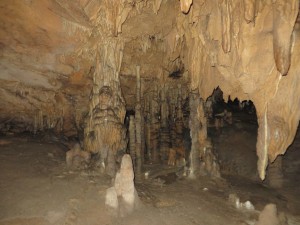 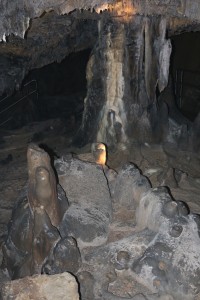 So much wildlife lives in this cave, including bats, salamanders, snakes, and other animals.  We also learned that the cave is still developing in many ways. As we entered the cave, our tour guide told us that this cave is completely naturally made and that we were to keep to the path.

Before we had gone even two hundred feet into the cave we saw… a bat!!! Don’t worry this bat was barely the size of our two fists combined.  We were horrified to learn that a terrible disease called the White-nose syndrome was killing them off, and a cure was yet to be found.

Let me tell you, as our trek continue and we went farther and farther down, it was started to get scary.  The paths were very close together and the rocks above me seemed to be balanced on the point of a knife, it was all darkness except for our few flashlights.  The tour guide sensing my anticipation shared some interesting statistics.  Did you know that if there were an earthquake, like for example the earthquake that cracked the empire state building, the cave wouldn’t feel a thing?

Continuing into the tour we found an amazing little pond, never have you ever seen water so clear.  There was an old legend that a girl (Cleopatra) would travel thousands of miles everyday to bathe in the water but she was the only one that could.  Of course that’s just a legend. 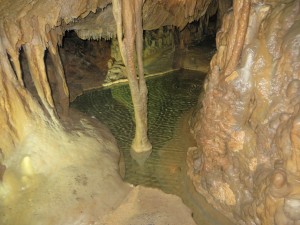 The guide shared another  legend as we climbed threw a tiny opening called “Tall Mans Misery” where we had to get down on our hands and knees. 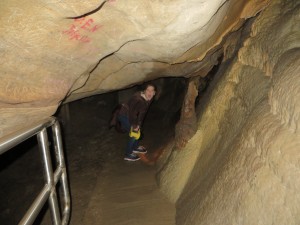 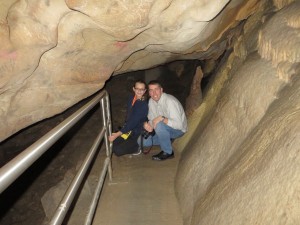 According to the legend, a man came to this place every week to sing, and one day he forgot his lunch so he came back to the cave, but got tired and rested, and he never woke up.  Their so called “proof” is a rocked that’s shaped (in a very creepy way) just like his head.

A little further on we saw a salamander, this one was not an adult yet but no longer a baby, it was just a bit larger then your palm, and was super bright orange with bright yellow dots all over it’s body!  Really amazing! 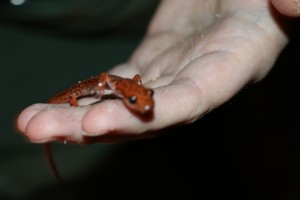 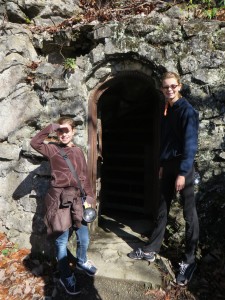 Sadly the tour came to an end shortly after the salamander and we climbed out of the cave and headed back down the trail to explore the Cumberland Gap Visitor Centre and the Lookout where you can see five states. 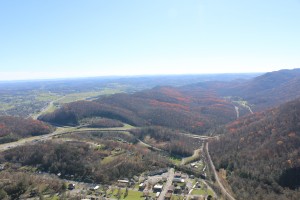 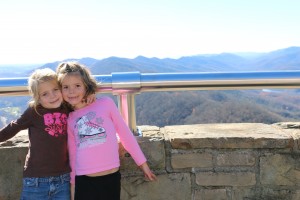 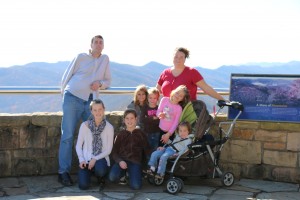 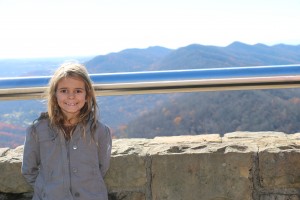 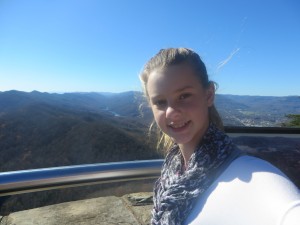