We were a bit late beginning our adventure today. Some work issues prevented us from leaving on time. Luckily, we had decided to break the trip into two days so we didn’t get too excited.

However, that all changed when we reached the border. The discussion with the border patrol officer started as usual but ramped up to a scene from a movie within minutes. The officer started to walk around the van to open the side door and verify the children when he suddenly and expectedly bolted back to his booth.  Mark and I both looked at him as if to say “what’s going on dude!”  He didn’t say a word, but he motioned with his head to the car beside us. We turned our heads back and were stunned to see 20+ officers surrounding the car and a man on his hands and knees being handcuffed.

Shortly after that, the border was temporarily closed and we were escorted to secondary screening.  We were there for almost a hour and Maria was not very compliant with the sit on this bench and wait approach. Of course there are no cell phones allowed and we were not permitted to grab anything from the car so it was a very long hour.

Of course, our ordeal was nothing compared to the poor guy arrested. Turns out he has the same name as some high risk fellow and he has had to go through this every time he crosses the border since 2012.

When we finally got through the border, we were met with one traffic jam after another and our short 6 hour drive took almost 10 hours. We turtled at the Welcome to Kentucky rest stop and froze our butts off. Mark asked to roll over in the middle of the night because his arm fell asleep and I bit his head off, refusing to move because I was in a cocoon with my head inside and it was still freezing. I was not about to move to a non warmed section of the bed. The monster I unleashed promoted him to get up and turn on the furnace. I would like to be able to say it was all about protecting my babies and not just me being really grumpy but unfortunately it was all about me in that moment.  Once the furnace defrosted the place, it was a much more enjoyable night. 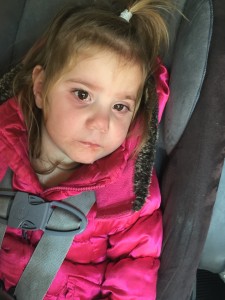