Having thoroughly enjoyed our time playing around Sauble Falls yesterday, we decided to continue the fun today by exploring the three main waterfalls around Owen Sound: Indian Falls; Weavers Creek Falls; and Inglis Falls.  All of these falls are within 10 km of downtown so it seemed like it would be easy to accomplish in one day.  However, if you truly want to take in the forest, the trails, and all the plant and wildlife they have to offer, it is really more realistic to do two.  That is all we were able to accomplish and we still felt rushed to complete those two. 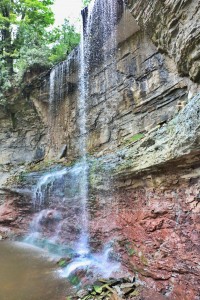 Our first stop was the Indian Falls Conservation area.  We followed a one-kilometre trail from the parking lot along the Indian River to the top of the falls. The gorgeous horseshoe-shaped bridal veil waterfall is named after the Nawash Indian tribe who lived in this area at one time. It is a 15 metre high waterfall that was formed by the erosion of soft Queenston shale beneath hard Manitoulin dolomite, in a manner similar to Niagara Falls.

The hike up the escarpment was a little rough but there are primitive stairs to help with the ascent.  We were all thoroughly impressed with Maria who insisted on hiking the entire trail all by herself without any assistance or anyone’s hand.  It was also nerve wracking since the edge of the trail is the gorge.  There were a couple of times we had to race to put ourselves between Maria and the gorge.  She would immediately cross her arms to ensure we could not grab her hands and then change direction. 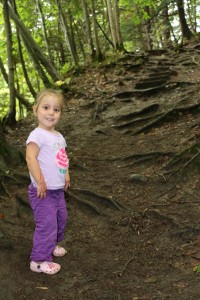 Due to the fact that it was summer, the water flow had decreased significantly. However, the unique rock formations and view of the gorge made the hike worthwhile.  In fact, the girls loved the hike so much, that once we had taken in the falls from above, we decided to head back and be adventurous by hiking the riverbed.  It was challenging at points for the girls but they said it was worth it, because at the end, they got to swim in the waterfall. 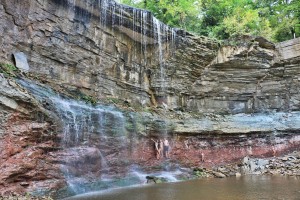 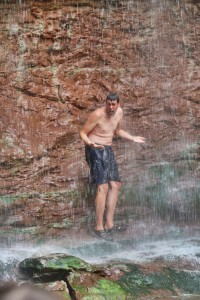 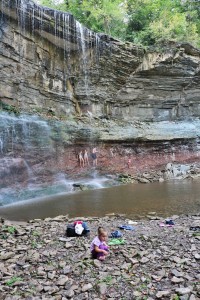 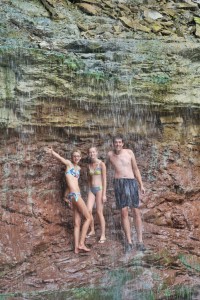 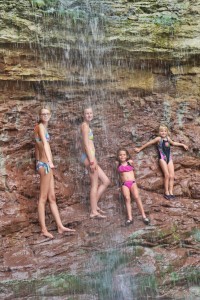 Sisterly Bonding- Who will jump in first? 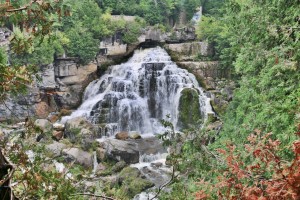 Situated in the heart of the 200-hectare Inglis Falls Conservation Area, Inglis Falls is an 18 metre high cascade, created by the Sydenham River meeting the edge of the Niagara Escarpment. The erosive power of the water has carved a deep gorge at the base of the falls. On a clear day you can see down the valley into the City of Owen Sound and out to the Owen Sound harbour.

There was something for everybody; a viewing platform for Maria who was unable to see over the stone wall, 7.42 km of trails of varying degrees of difficulty, more than 20 species of ferns, a series of geological potholes, historical remains of a grist mill and a water filtration plant.  The trail down to the waters edge was a bit tricky for the young girls but Daddy and the older girls loved it. 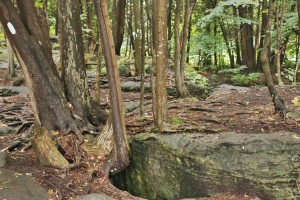 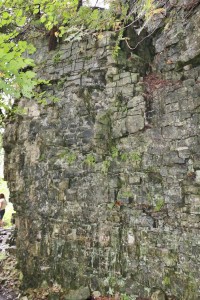 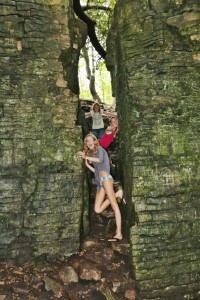 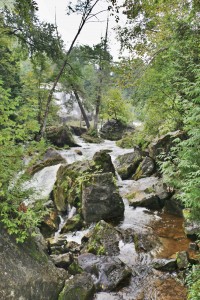 The view from the bottom of Inglis Falls 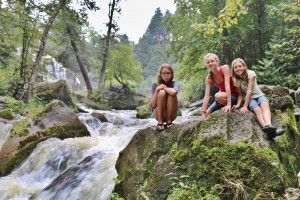 Kaatje thought this was a silly face picture. 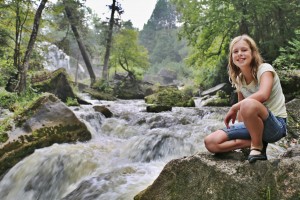 In 1843, five years after the founding of Sydenham Village (now the City of Owen Sound), 30 year old Peter Inglis emigrated to Canada and settled in this area. This enterprising young Scotsman and millwright saw the potential of harnessing the powerful cascade of the Sydenham River.

In 1845 Inglis purchased a small existing grist mill built two years previously by a Mr. Boyd, and 300 acres of deeded Crown land. It was in 1862 that Inglis replaced the old gristmill with a new four-storey mill that produced flour, bran and shorts (feed for animals).

Other ventures of Inglis’ included building a sawmill a quarter of a mile downstream of the falls. Peter Inglis also built a woollen mill on the eastside of the river on the brink of the falls. Here were manufactured tweeds, flannels and “rainbow” blankets, so called because of the three coloured stripes at each end. The woollen mill was destroyed by fire around 1885. It was rebuilt only to burn down again in 1901. The family never told Peter of the loss, and the woollen mill was never rebuilt.

Management of the mill was passed on to Inglis’ oldest son, William A., in 1886. William’s son, Victor, managed the mill until 1932. Eighty-seven years of steady operation under the Inglis family name is an amazing record which very few industries in this area of the province can surpass or equal.

In 1932, the property was obtained by the City of Owen Sound for water rights. The mill was idle for two years, until purchased by Emil Henkel. He ran the mill until 1945 when a fire completely destroyed it.

The Rockford water filters were built in 1910 and served an area of Owen Sound that was being expanded at that time. Water was taken from the Sydenham River above Inglis Falls and cleaned in the filters before sending it on to Owen Sound. These filters provided 2,500,000 gallons of water per day to homes and factories. The whole system was based on gravity.

The project began in 1910 and was completed by 1912. The project consisted of a water works dam, a 24″ aqueduct concrete feed to the filter, the Rockford filters, six miles of 12″ pipe, and a 5,000,000-gallon reservoir. This was a tremendous undertaking for the time, with over 400 men involved, the mixing of the concrete for the filters and reservoir, and digging and covering of the pipes done by hand. A man’s work for a day was to dig, help lay, and backfill one 12′ length of pipe.

The water works dam was designed to keep a steady supply of water flowing to the filters. It had a water gathering system called a weir (a concrete box with an iron bar cover which kept out large sticks and floating debris). It was built over the end of a 24″ concrete aqueduct that ran to the filters.

The filters were two 160′ x 80′ covered concrete structures, separated by a 5 foot wall (above the sand). The whole structure was built half in the ground and half out. The ceiling of the filters is an amazing structural sight with a series of 2 foot square concrete pillars holding up the concrete roof. You can still see the imprint of the boards used to shape the curved ceiling. The topside of the roof was covered with soil and planted with grass. Manholes with round steel covers were spaced out in the roof. They let light in and allowed sand to be added if required. The filters were watertight and had an inlet from the river and an outlet to Owen Sound.

The bottom was covered with half round tiles laid out in a herringbone style, which gathered the water and brought it to a control well at the west end of the filters. From here the water flow was regulated. The tiles were covered with 6″ of 2-inch gravel, then 6″ of 1-inch gravel, then 2 lifts of smaller stone, and a top layer of two feet of sand. Altogether the filter material was 0.76 metres to 0.91 metres deep. The water ran over the top of the filter and then down through it. This system is referred to as a physical filter

The process of cleaning the water filters was labour intensive, involving washing the top layer of sand. It took six men two days to clean one filter. Three men would skim the sand, two men would run wheelbarrows to the door where another man loaded the sand into a sand washer. The washer was filled with water and the sand was pumped under 110 pounds of pressure and sprayed out a fire hose which ended in a ¾” nozzle. The clean sand was deposited on a large cement pad outside the filters and then replaced by filling wheelbarrows and dumping the sand through the manholes in the roof of the filters. This process had to be done every two to three months, less frequently in the winter. Near the end of its use, the filters had to be cleaned very two to three weeks because of degrading water quality.