Having been to Niagara numerous times, and having lived here for years, we decided to leave this trip planning up to the girls.

On the first day, we asked them what they wanted to do, and we were pleasantly surprised when they unanimously all shouted “tire swing” By tire swing, they really mean steep dangerous hike down the gorge to super secret swimming holes of DeCew Falls. 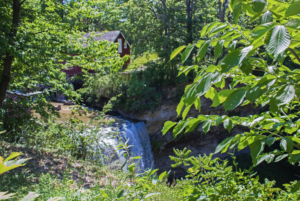 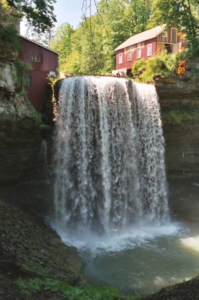 When we arrived in the parking lot of Morningstar Mills, it quickly became apparent that we were not going to be the only ones there this time.  The parking lot was crawling with bikini clad teen girls and several boys all in tow.

We piled out of the car, and read the several historic plaques about the Mill and the family who built it. 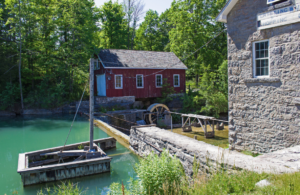 We read about the spiral straircase- long since gone- that brought tourists from all around.  We all joked about how nice it would be to have a staircase now. 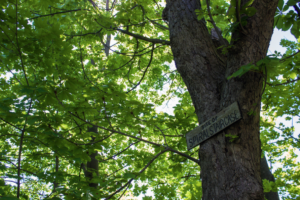 Since they don’t, we need to hike several kms back to find a place that is safe enough to descent the gorge.  Even then, it is very rocky and a steep incline.

With the sky thundering above us, the girls were eager to get down and get some swim time before the heavens opened up and soaked us.  We passed several places where the adventurous teens decided to attempt a descent.  The kids naturally wanted to follow. Mark investigated a couple of the slopes, but they were too dangerous.  We decided it was better to hike the distance and stick to our familiar path rather than risk this.  Of course hiking several kms to reach the safe place to descend, also means hiking several kms back to get to the water falls pools. But safety first.  And although the kids don’t remember…the tire swing pool is actually located at the bottom of our typical  descent path.

We reached the bottom of the gorge safely and had several turns swinging from the rope that the tire swing use to hang on.  The kids say it was just as fun as they remembered. 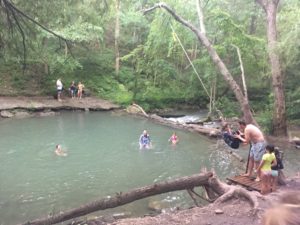 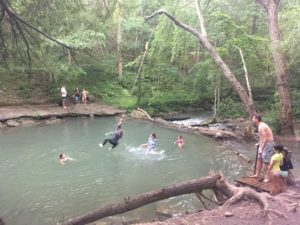 After watching her sisters…even Maria wanted to give it a try.  Of course…one second in, she was deeply regretting that.  Her screams were so loud, we joked that the emergencies sirens we were hearing were coming for her.  Needless to say, Maria was one of the only ones not to go for a second and third turn.

The kids were laughing and enjoying every minute.  They were the only ones brave enough to attempt the swing, but with every passing moment, all the other children around, were inching closer and closer, asking questions like how deep is it?  Does it hurt? Is the bottom rocky?

Unfortunately, with every passing moment, I was getting more and more anxious.  The rain was light, but the sky was dark and the storm threatened to break at any moment.  Having been down here before, I knew that the climb up would be difficult for some of the little kids, but it would be almost impossible if the sky opened and soaked us all us, turning the steep slope into a mud pit.  The kids allowed themselves to grudgingly be pulled from the pond and to start our ascent.  Of course, that ascent was coupled with a lecture about the need to respect nature and to be aware of how the conditions can change.

We hiked the few kms back in relative quiet and with a fairly quick pace.  We were soaking wet form the swim and tired form the hike.  We were all motivated with the thought of nice warm showers, and a BBQ.  As we rounded one of the last corners before the parking lot, we were all shocked with the sight that greeted us. There were at least 20 emergency personnel and an emergency response station blocking the entire trail.  They were rigging up an emergency ascent with stretchers to rescue two teens who had fallen.  It was a very frightening sight and brought home all the conversations we had just been having.

Realizing it was probably going to be hours before this cleared, we decided to go off trail and look for a way around.  We fortunately made it to the parking lot without too many scrapes but it was all for nothing.  The numerous firetrucks, ambulance, and police vehicles were everywhere!

We had front row seats for the arrival of the orange ambulance.  I have to admit that it was a very sad sight- knowing that the injuries were life threatening was very sobering for all of us.   Hopefully everyone is ok! 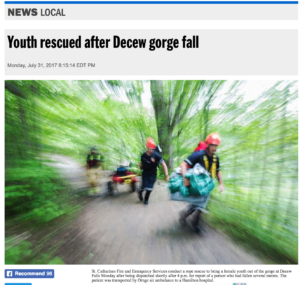