We spent the first the first couple of days mastering the Singapore transit system.  However, I have to say that it really doesn’t take much.  It is so well thought out and they even have an ap where you can put in where you are and where you need to go, and it tells you exactly what to do.  No fiddling with schedules…it is amazing. 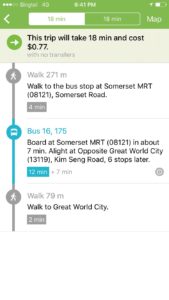 Sorry the picture is blurry.  Should have saved a higher quality.

Kaatje had two castings today- one for a Gucci photoshoot on Friday and one for a magazine shoot in a couple weeks.  We haven’t heard anything back and Kaatje is worried because the humidity was doing a number on her hair.  Even with fuzz ball hair, she is still a beautiful girl!  I am sure she will get it.

This is the view from Kaatje’s first casting 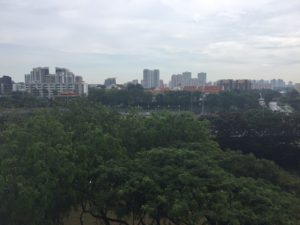 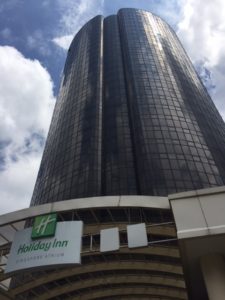 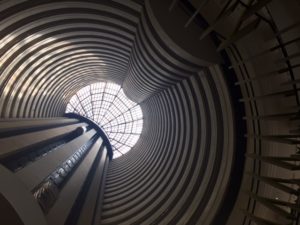 Once we completed Kaatje’s castings, we headed to the agency to meet Sera.  She had been out previously scouting new office space.  Turns out they are moving directly across the street form where we live.  How convenient!  Hopefully they get to move sooner rather than later 🙂

After that we walked home in the crazy heat again and were ready for a nice dip in the pool by the time we got there..  We spent about an hour in the pool until we were shivering and then we made our way back tot he room for some sandwiches and fruit.  We are now just waiting for it to be daytime where daddy is and hoping we can catch a quick call.

Just found out that Kaatje landed the Gucci shoot.  She will be shooting this Friday.  She is super excited.  She has now has three more casting calls for tomorrow.  All on totally opposite ends of the city.  We were literally just saying how nice it would be to relax tomorrow because she only had 1 casting at 5pm.  WRONG!  Oh well.  Hopefully those castings are as successful as her first one.

I promised Kaatje when she landed her first photoshoot I would buy her either milk for cereal or a starbucks drink- both which are crazy expensive here.  They weren’t kidding when they said it was the most expensive city in the world to live.  Now she is struggling with what to choose.  I think her exact words were” Oh the decision in life!” 🙂

Here is Kaatje enjoying her 7-11 slurpee yesterday.  Wow did that bring back memories of Thailand.  It was so crazy hot outside and then we went inside and it was like walking into a freezer.  They keep those stores so cold you can walk by wihtout wanting to go in and once you are there you just want to buy more things so that you can stay in the refreshing cool air. 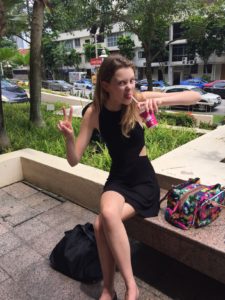